Is there something that I’m missing about conceptual art? By conceptual art I mean things such an artist putting a chicken on top of a lampstand cum cardboard box (Rauschenberg) or hanging a shovel from the ceiling (Duchamp). The ones that you need an instruction manual to understand and a dictionary to translate the artist’s equally complex explanation of their own work.  I have been left wondering why such value is placed on conceptual art when so many of us admit to not understanding it. Call me old fashioned, square, or just plain unimaginative but I think art should first arrest you visually and then offer further meaning.

Even after making an extra effort to be ‘open minded’ about recent exhibitions I am equally ignorant to the ‘concept’ behind this type of art. So, I thought I’d spell these reactions out and hopefully you will grasp where I’m coming from. Either that or I could assemble some flatpack furniture underwater, take a photograph, put it on the wall and leave you work out what I’m thinking.

It’s free to visit and the building is a great piece of modern architecture. It’s minimalist in design, polished concrete floors and lit in a way that plays to all the myriad of reflections that the building offers. And the art inside?  Much of it was really arresting, particularly Evans’s Illuminating Gas, where neon lights formed the shapes of words which shifted as you walked around it. It fitted well into the stripped back gallery space. Jassens’s work too was interactive and visually striking. Now to Ortega’s show which is where I got lost, or perhaps it began before I walked into the room – while I was reading some of the accompanying notes for his show. He describes his show as ‘emotional geometry’, expanding on this to say that ‘the logic of fragmentation is one of chance, accident, eventuality, contingency, ephemerality and incompleteness’. Now I tried hard to absorb this and to like his work, yet I couldn’t engage with it. Apart from a few pieces I couldn’t read the visual symbolism or appreciate what I was looking at. It frustrated me that there was meaning in his work but I had no means of accessing it.

A survivor, literally – he’s still alive, from the period that produced Jackson Pollock and Robert Rauschenberg is Jasper Johns. Hailed by critics as one of the most important artists of the last century, he has been described as driven by an ‘unrelenting scepticism’ whose work ‘worries openly about how – and whether – art works’. Now I happen to agree, but that isn’t the point. Part of what I am getting at is that I didn’t need any explanation to appreciate his work. At the entrance to the exhibition I was greeted by his iconic work Flag – a copy, of sorts, of the American flag using an ancient technique called encaustic, vaguely like papiermache.. Then there was Target and Numbers in Colour. They were arresting, colourful, easy to take in but somehow hinting at something more than the surface. While I preferred John’s earlier work, I drew confidence as a viewer from the constant emphasis on painting as an art, on colour and composition. Traditional techniques, as he shows, aren’t a hindrance to fresh, modern art.

I was nervous about going to this show. Neither Dali, who I knew for his bizarre drooping clocks, or Duchamp, the man who turned a urinal into modern art (and in doing so created the notion of conceptual art), fit into my traditional sweet spot for artistic enjoyment. If anything, I expected that I would find more to like in Duchamp who I admired for his brazenness. In actual fact, I left with an enhanced respect for Dali and the breadth and impact of his work. Beyond surrealism he was a hugely accomplished painter and his crucifixion Christ of Saint John on the Cross is rightly revered, his publicity seeking stunts, while truly bizarre were fresh and surprising. Duchamp’s depths, on the other hand, eluded me. Fountain (the title of his urinal piece) is still iconic and I liked the playfulness of his graffiti of the Mona Lisa. However, his work felt resolutely surface deep, none more so than his conceptual art. Hanging from the ceiling was a shovel or Prelude to a Broken Arm, sardonic title, sure, however what does it mean? I’m a practical person, I like shovels but I appreciate them more in a hardware shop and hasn’t Duchamp already proved the artistic value of everyday objects with Fountain? I felt alienated by it and many of his other conceptual pieces – I suspect I wasn’t alone.

Yet, I have this nagging feeling that I really am missing something. I can see that Duchamp was pioneering in showing how art could be about concept and not beauty and that Ortega is using art as social critique. Yet, if their work rejects the notion of physical beauty and looks instead to ideas doesn’t it fail if we can’t read the meaning which the artist wants to convey? Do we really need conceptual art in modern society, I wouldn’t miss it.

Christ of Saint John of the Cross – Duchamp 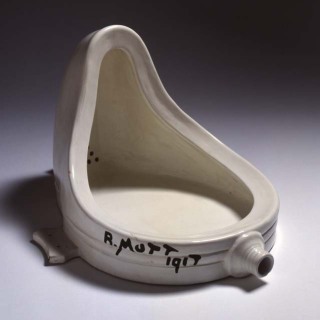 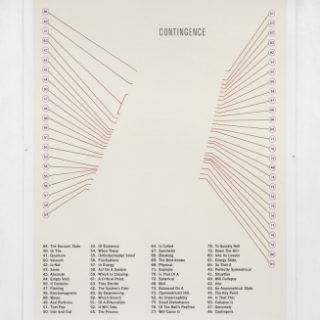 Prelude to a Broken Arm – Duchamp